Another year gone in movies and in case you missed it I discussed that and more in my Top Ten Movies post. This post is going to be the first annual Apple Juice awards where I will dole out the real winners of the cinema this year. Some will be similar to NBA style awards and others will be just jokey, yet kinda serious awards. So here we go with this years Juicy’s, starting off with the big ones first.

He was just unstoppable this year from The Dead Don’t Die, to The Report, to Marriage Story, and just a little sprinkle of something called The Rise of Skywalker (EVER HEARD OF IT?). He firmly established himself as a top 3 pound for pound actor in the world (see below) because he showed he can do Comedy, Drama, Fantasy, and even sing in Marriage Story. He has it all and is only 36 so he will be in many great movies for a long time to come.

Scar Jo is one of the Queens and she dominated again this year. Of course she was in a little movie called Avengers: Endgame, she also was one of the best parts of Jojo Rabbit, and topped it off with and Oscar worthy performance in Marriage Story. She also has Black Window coming in a couple months so she really is on top of the world right now. MVP performance from Scar Jo in 2019.

He had a smaller role in Endgame near the end but I thought his performance in Us was just phenomenal. Not a ton of other truly breakout stars on the male side, so I will give it to him for his great performance in Us. He has a couple big 2020 movies coming including the new Peter Berg movie, so I am excited to see him move forward.

Absolute no brainer and almost had a good enough year to be the MVP outright. Fighting with My Family, Midsommar, and Little Women are all really good movies and she is great in all of them. She is a full on superstar in the making in any genre and of course is getting a Marvel movie with Black Widow in the next few months. She is on the rocket ship Juicers.

A little about the award…Ben Stiller’s character Tony Perkis from the iconic film Heavyweights, in my opinion had a point in being mean to those kids. They were at FAT CAMP to lose weight and they were sneaking snacks in and just complaining all the time. Sure his methods were harsh (“Lunch has been cancelled due to lack of hustle, deal with it”) but he had the right intentions for the kids.

I still have no clue what happened in this movie, but I do know that literally like an entire world of people were just being held underground. So yeah I think she had a point to try and fight back against the society that has pushed them away. Again Tony Perkis style her methods might not have been the best, you know killing people and all, but I get it!

Woah, did I not expect this from Shia this year. He was amazing in The Peanut Butter Falcon, but his performance and screenplay from Honey Boy really showed what he is all about. I have already written plenty about my love for Honey Boy, but man to announce yourself back on the scene with a movie like that is just so inspiring. I hope he continues the momentum in 2020.

A little about the award..Viola Davis is the G.O.A.T. movie crier, simple as that.

Brian Banks is a movie that kinda came and went this year without much fanfare. But it is an extremely inspiring story even if the movie is not 100% the best. This story and performance had me ugly crying by the end of it and it really made me feel for the real Brian Banks.

SHOCKER! Here in the Juice headquarters we made the decision to name this award after our first winner, NBA Hall of Famer Kevin Garnett. This award is because he not only was in Uncut Gems, but he had a major role and had to do real acting. The last time I had really seen this was Ray Allen in He Got Game, so yes KG wins our Inaugural Out of Left Field Performance Award.

I love Boxing and MMA and Pound for Pound lists are always all the rage. So I decided lets rank the actors in a similar way. These lists are comprised based on two things.

These are obviously perfect and you cannot argue with them at all so do not even try! 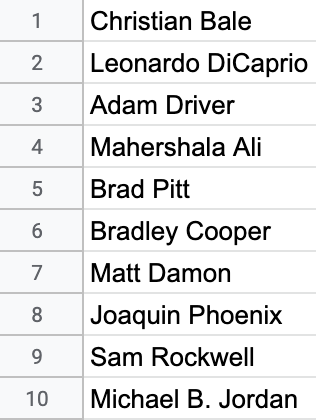 What an awesome year and I cannot wait to see how everything shifts in 2020.