A stage director and his actor wife struggle through a grueling, coast-to-coast divorce that pushes them to their personal and creative extremes.

Marriage is such an interesting concept. We as humans decide we are going to spend the rest of our life with someone we love for better or worse. Sometimes though, that worse gets so bad that Divorce is necessary even if it is going to affect everything in your life. Noah Baumbach’s new movie (streaming now on Netflix) tells the story of a couple going through a divorce, which mirrors his own divorce with Jennifer Jason Leigh.

We meet Charlie and Nicole in therapy having already decided to get a divorce, and from there we see the entire journey of how a divorce can play out. They go from not wanting to use lawyers, to both finding lawyers to tear each other apart. They also try and do it amicably and end up in a room screaming at each other. Through this devastatingly honest story, we see that sometimes fault does not matter as much as how the pieces are picked up.

The movie was classic Baumbach through and through with a personal script and numerous relatable characters, but you can tell he put just a bit more of himself in this one than some of his previous work. This is getting a lot of awards hype not only for the movie but for the incredible performances.

He is on an all time heater as I talked about in my review of The Report. He is arguably the top actor in the world and this was his Oscar moment in my opinion. Best actor is absolutely loaded with Eddie Murphy, Joaquin Phoenix, Leo, De Niro, Antonio Banderas, Bale, Egerton and more to come so it is going to be tight. But Driver’s performance in this might be the best of the bunch. He is funny, mean, awkward, and everything in between in this role. He is most likely the 2019 MVP of the Cinema.

A female MVP candidate on the year with Endgame, JoJo, and now this ScarJo is a true Queen. There is a scene in this movie where she gives a monologue for like 6 minutes while washing her hands, walking around, and eating. It is mind blowing some of the work she is doing.

For a long time the film nerds have regarded Baumbach as on of our great directors, but his last movie The Meyerowitz Stories and now this have given him a much bigger platform. He does not have a ton of variety in his movies but he executes his plan at the highest of levels. He has a real shot at the Best Directing Oscar.

She is on an absolute heater right now with Big Little Lies, Twin Peaks, and now a role that has people talking about Oscars. She plays such an arrogant Divorce Lawyer for Nicole but just looks like she is having the time of her life. She knows she owns everyone in every scene so she walks all over them. I loved to hate her in this movie. 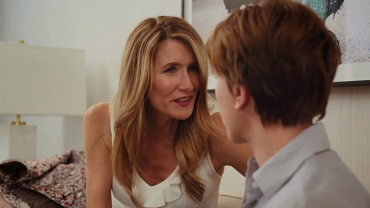 Woah, 200 credits. So my Dad and I established 150 credits for a character actor is official “That Guy” status so Wallace Shawn definitely fits the bill. Honestly he is a hall of famer in this category so it is a treat to see him. He just plays one of the guys in the theater troupe but he does make his mark as always.

Baumbach has created a really special experience with this movie. It might not be easy to watch but I think it really gives a good glimpse of what real life can be like. He also coaxes some of the best performances of the year. I am happy Netflix has decided to promote his movies because I do not think they never did great in theater but I still think they are interesting and important for people to see. Marriage Story is one of the best movies of the year.