Sports movies are usually very cliche and for good reason. Usually you have some sort of Underdog, who overcomes gigantic odds, throw a couple training montages in their and a sappy ending, and boom you have a solid sports flick. High Flying Bird is the new film from Steven Soderbergh the Netflix bought to add to their ever expanding library, and it changes up the formula. It is more about the behind the scenes of Labor Negotiations than actual sports, and it feels very current to today’s NBA landscape. To bring matters closer to real life, they splice in interviews with Karl Anthony Towns, Donovan Mitchell, and Reggie Jackson talking about life in the NBA.

The movie is about a Sports Agent, Ray Burke, working his way through a work stoppage in the NBA (not NBA in the movie due to rights, but its the NBA). He has to work with many different characters throughout the process such as: the head of the players association played by Sonja Sohn (WIRE!!), the lawyer for the NBA played by Kyle MacLachlan, and his assistant played by the lovely Zazie Beetz. Through Ray’s eyes we get to see the true difficulties in all parts of negotiations in the NBA.

The amazing aspect of this movie is that Soderbergh filmed the entire thing on an iPhone. He talked about it and he said he does not do it because he is trying to prove a point, he does it because he thinks you can get incredible angles and shots. Such as below you can tell he had the phone on the table just sitting there filming Melvin Gregg (shoutout American Vandal). 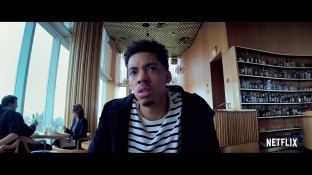 The most interesting aspect of the film is for sure watching how Andre Holland’s character works as an agent. He gets to put on many different hats throughout the movie such as: dealing with his own agency leaders, working with the league during the work stoppage, and signing star players during the down period. Holland plays each part in different but effective ways and it really showed the many sides of being an agent.

Stock Up – Andre Holland as I said above is great throughout this whole movie. He is basically in every scene and he carries this from start to finish. I had only really seen him in Moonlight and A Wrinkle in Time before this so I am excited to see where he goes from here.

Stock Up – Zazie Beetz has been on Atlanta for a couple years now and was the breakout star of Deadpool 2. This movie showed that she has even more dramatic chops and she is ready to carry her own movie.

Stock Down – Give me more Zachary Quinto please, this is not helping him post Heroes and Stark Trek in his career.

This was a really enjoyable and interesting movie to watch. It goes great into the Soderbergh filmography and its on Netflix! Which means you can just watch it any time, so if you’re bored flip it on, its much better than most of the movies they produce.