We have a solid weekend of fights starting with DAZN and finishing with a bang for the first Pay Per View of the PBC on Fox Era. Here is my breakdown for all of the fights this weekend! 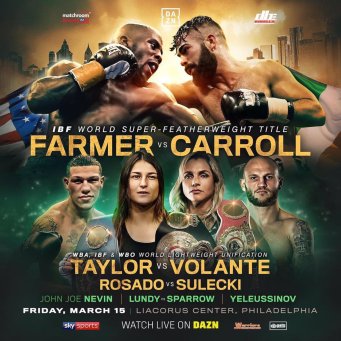 Implications: After 12 fights in his career Tevin Farmer had 4 losses and a draw on his resume. Now he is the IBF Super Featherweight Champion, and that just does not happen in Boxing. Farmer is a story of perseverance and never giving up on your dream. This weekend he is main eventing a homecoming card in Philadelphia against little known Jono Carroll.

Jono actually had a draw in his last fight and this is his first step up in competition. He only has 3 KO’s in 17 fights so I do not think his power will be an issue for Farmer’s incredible defense. I think Tevin actually finishes him in the 9th or tenth round to make a statement in the 130 lb. division.

Implications: This is a major fight for Pound for Pound Supremacy for Fox’s first PBC Pay Per View. We have Errol Spence (Juice’s #9 PFP), The IBF Welterweight Champion who no one in the division wants to fight because he has dominated everyone in his path.

We also have Mikey Garcia (Juice’s #6 PFP), the 4 division Champion who took 2 years off in his career, but has come back to look even better than before.

The story on this fight has been Mikey jumping up 2 weight classes to fight at Welterweight and try to win a title in his 5th division. He is probably the most technically sound boxer in the game. Almost like Tim Duncan where he does nothing flashy at all, just fundamental brilliance. This is a chance for him to dare to be great.

Errol Spence has been on the warpath ever since the 2012 London Olympics. Since then he has become the Boogeyman of the division and is so big he will probably end up at Middleweight before his career is done. He is very technically sound as well, but can bang too, especially to the body. This is also a homecoming fight for him in Dallas so he should have a good contingent of fans.

I think Mikey is an incredible fighter and if he wins he should be the number 1 Pound for Pound fighter in the World. I just think Spence will be too big and too good for him though. If Spence was not as talented as he is I would give Mikey much more of a chance. I just think Spence by 9th round TKO.

The undercard here is not great other than the return of David Benavidez. I do not know how they expect to sell these pay per views at 75 dollars a pop with this weak card. I still hope we great a great main event though.

I hope everyone enjoys!