Every few years we see a movie come along that changes the way we look at special effects. Star Wars, Jurassic Park, Avatar are just a few examples of what a movie can do with amazing special effects work. Gemini Man unfortunately, was not one of those movies. Give Director Ang Lee (Brokeback Mountain) points for trying, but this experiment was doomed from the start.

Gemini Man is about a man named Henry Brogan (Will Smith) who is a government assassin about to retire. He gets sucked back in for one last job when he finds out his own employers are using A YOUNGER CLONE of himself to kill him. That is about it as far as the coherence of the storyline.

Of course there is a larger motivation, but it really is muddled by the mediocre script and the aforementioned special effects. Now, the special effects are how they have been marketing this movie. They made sure to tell you they did not de-age Will Smith rather than make a CGI replica of him. The effect is cool but once he starts moving and talking he just looks like an Avatar in a bad video game. The green screen as well made the overall look of the movie have that Soap Opera effect that I know you all understand. This is caused by Lee filming the movie at a much faster rate than 95% of movies can show it. But that is the nerdy stuff that we do not need to go into that much further.

Other than the look of the movie again the story just was not there, and the only scenes worth caring about at all were the action scenes. I guess at the end of the day this is an action movie so that is all that should matter, but if it looks bad, it looks bad.

Stock Down – Will Smith is one of the most recognizable faces on Earth, so as I said in Aladdin I thought that raised his stock because it could set him up for a nice back half of his career. This performance brings him back down a little, even though hes still right at the top of the heap. Bad Boys 3 comes out in January so we will reassess then.

Stock Down – Clive Owen was very underwhelming in this movie as the de facto bad guy and “father” of Henry’s clone. Some of that was due to the lack of an in depth part, and some of it was just him maybe knowing this was not The Godfather. Either way he has seen better days on the screen.

There was some good action in this and it will probably be on TNT or FX in a year or so, but I just cannot get over how poorly made this was. It was just a pretty bland movie that just looked like a video game half the time. Not one of Will Smith’s masterpieces but I applaud the effort of trying something revolutionary. 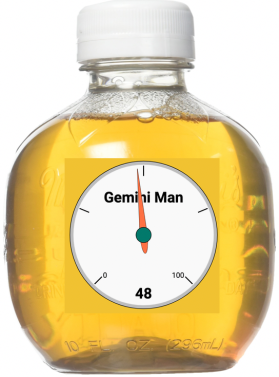 *All of my Movie Ratings can be found here.

One thought on “Gemini Man Review”