Guy Ritchie’s Aladdin is another in the line of Live Action remakes that the Disney Machine is churning out. This year alone they had Dumbo, Lion King in July, and Maleficent 2 in October.

Aladdin is of course extremely similar to the original 1992 animated film but, however we get Ritchie’s spin and Will Smith as the Genie! Everyone knows the story, smart but poor boy Aladdin finds a magic lamp, befriends the genie, and through some hijinx wins Princess Jasmine, and defeats Jafar. What makes this fun though is there are new characters, new songs, and outstanding choreography for all the musical numbers. Growing up I always enjoyed the music even more than the story so I was glad to see Ritchie seemed to really focus on that. He also brought in Benj Pasek and Justin Paul (Dear Evan Hansen and the Greatest Showman) to write the new Disney Anthem “Speechless” for Naomi Scott to sing as Jasmine.

I will say it is a slow start and it is tough to see this movie is over two hours when the original is like 94 minutes. The actions scenes did look great though, and everything with magic carpet was cool filmmaking. They really try to put more of an emphasis on Jasmine it seems, because she did not get a ton to do in the first, and was considered one of the lamer Disney Princesses. Naomi Scott’s Portrayal will be one that should be talked about coming out of this movie.

Stock Up – Will Smith is fully back with his dynamite performance here. Replacing the iconic Robin Williams Genie was the biggest question everyone had going into this. Smith absolutely paid tribute to Williams, while also putting his own spin on the legendary character. This could set up a nice back half of his career if he plays it right.

Stock Up – Mena Massoud was a very charming and enjoyable Aladdin that I believe kids will love. He had an incredible voice and was able to dance and do all the stunts necessary it seemed to create the character. I had never seen him before this but I believe he has a bright future ahead of him.

Stock Down – Marwan Kenzari really was not good as Jafar. It came down to the fact for me that he just was not scary and did not really bring an overpowering presence that you need for that role. I again had not seen him as well before this, and in my opinion this performance did him no favors for his future.

Stock Up – Naomi Scott was probably the second best part of this movie after Will Smith’s genie. She crushed the new song Speechless and brought a tenacity to the role that was nowhere to be found in the animated version. She is a princess young women can look up to and be proud of and I think that is really important. Loved her in Power Rangers, loved her in this, cant wait to see what is next.

Overall this seems about par for the course in this reimagining of all the Disney properties. Guy Ritchie brought some flair and made this movie much more enjoyable than I thought it was going to be. It does the original justice and that is all you can ask for. 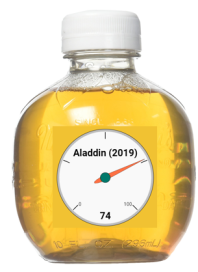