*They are a weird family consider yourself spoiled

I really do not understand the concept of The Addams Family. No, not the movie that just came out, the overall idea of this family that just likes the opposite of everything considered “normal” in our world. In this movie alone Morticia (Charlize Theron) asks Lurch to dust the house, and yes she means add dust to the house. So I never really understood how you can take that concept and make long stories around it. They originally tried it with varied success in the 90’s with The Addams Family (Juice Rating 74/100) and Addams Family Values (Juice Rating 46/100), but now they wanted to see if the cooky family lends itself to the animation medium.

There is not much to say about the animation studio on this, because Nitrogen had only done Sausage Party before this movie. This also happened to be directed by the same duo in Conrad Vernon and Greg Tiernan. So I guess we can say they are up and coming in the animation game.

Animation – C+ There was nothing terribly wrong with the overall look of the movie, but I just thought nothing stuck out either. The animation was fine and the only reason for the + is the cool uses of the different members of the extended Addams clan.

Voice Cast – C- The thing about this cast is of course I like most of the people in it.

I just thought the performances were kind of annoying and that was tipified by Nick Kroll. Kroll can be hilarious (see the League, or Big Mouth) but he can also be really annoying (see The Kroll Show or Uncle Drew). This was for sure one of his more annoying performances and ruined the Uncle Fester character for me. The Christopher Lloyd version is one of the best parts of the nineties movies but this version was just horrendous.

Other than that the rest of the family was fine but just not memorable like most animated movies.

Music – B Obviously we were going to get a version of the famous Addams family song, which we did and it accompanied probably the best montage of the movie. Other than that they had “Drop it Like its Hot” for Cousin Itt (Snoop Dogg’s) entrance, and a Migos song in the credits. Overall enjoyable soundtrack but again just nothing crazy memorable.

Story – D This is where most Addams movies fall apart and this one was no different. They made this whole movie basically an Anti-Trump movie, which has no business being in an Animated Family movie. I mean just look at the Real Estate villain Margaux (Allison Janney) in this….

LOL remind you of someone? Yeah it was basically just about how people think of the Addams as monsters and do not want to accept them. None of it is enjoyable or appealing and really made me sad that kids have to take in this messaging.

The only part of the movie I genuinely enjoyed was just meeting the extended Addams Family and seeing all the craziness they brought.

This is an Addams Family movie, so you know you are getting weird gags, uncomfortable laughs, and most likely a terrible story. If you walk in knowing that, you still probably will walk out of the theater wondering why the hell they keeping making stories about this weird ass family. 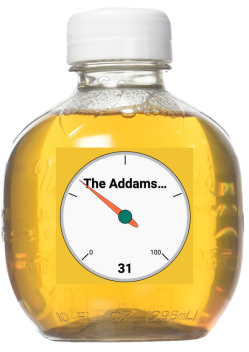 2 thoughts on “The Addams Family Review”