Stuber is a new summer movie that feels like a throwback to the great buddy cop movies like Beverly Hills Cop, or Midnight run. I went in with semi high expectations because the Director of this movie Michael Dowse holds a special place in my heart. He directed one of my favorite movies of all time, the Seann William Scott classic Goon.

Walking out I told my buddy that I thought the movie was better than I thought it would be, but the more I mulled it over it dropped in my book. The movie is about LAPD officer Vic (Dave Bautista) who is on the warpath for revenge for his partner Nebula, oh sorry wrong movie, his partner Sarah (Karen Gillan) who was killed by a gangster named Teijo (Iko Uwais). For reasons I wont disclose Vic has to get Lasik surgery so he is forced to call an Uber and he meets his driver Stu (Stuber, Get it?). They have a night filled with adventure and shenanigans and of course both teach each other how to live their lives in more fulfilling ways.

There are very funny moments in this, especially with the great Jimmy Tatro, but a lot of the action for me was filmed very poorly. It felt as if you were watching a shaky cam the whole time which was just weird for me. My friend posed the idea that the director did that to make you feel like Vic with no sight. Im not buying that though, I think it was just was not filmed great. I also just did not like the villain or the twist, all felt very forced and did not work for the overall story.

Stock Up – Kumail Nanjiani has been on a rocket ship since his breakout movie “The Big Sick”. He was one of the better parts of the new Men in Black and now I thought he was the best part of this as well. He was funny and hit all the emotional and crazy beats that he needed to.

Stock Down – Dave Bautista was supposed to be having his big breakout movie as a star in this. It really did not work for me because it kind of felt like Minions or Penguins of Madagascar, when you overdo something thats great on the side. Dave Bautista is amazing in his side role in the Guardians, however I may be biased as well because of this absurd tweet he put out this week. 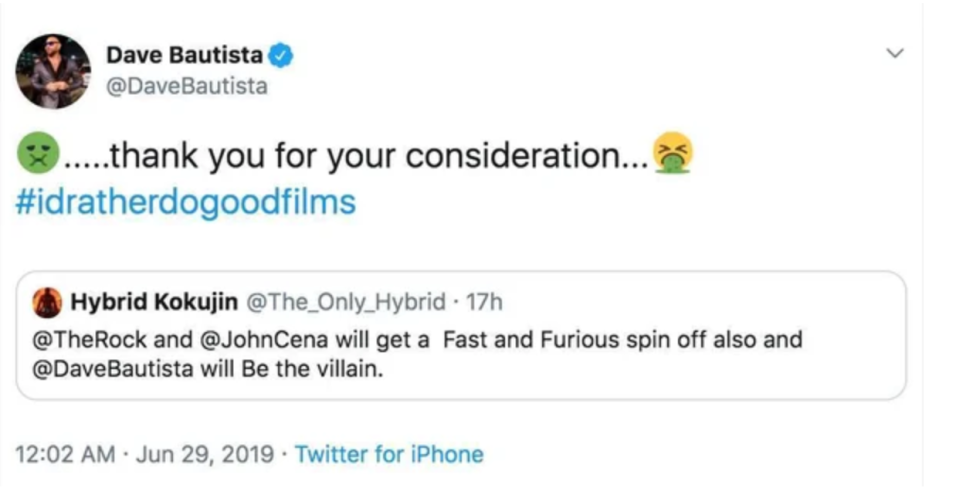 Dave, who the hell do you think you are?

Go make a good movie and then we can talk.

Stuber is definitely a throwback to the buddy comedies of old, but for me it did not quite reach the potential of what it ultimately could have been. There are very funny moments and some decent action so if that is what you are looking for Stuber might be for you!

One thought on “Stuber Review”