*Please see this movie before reading this, I cannot write about this movie without spoiling.

The epic emotional journey of a suburban African American family as they navigate love, forgiveness and coming together in the wake of a tragic loss.

When you see as many movies as I do sometimes within all the fray, you remember that movies are supposed to be art. We see so many movies that just go formula, and try and just make their profit and move one. So when you see someone take a chance it really makes an impact.

Waves is a new movie by Trey Edward Schultz and it randomly reminded me of Stanley Kubrick’s epic Full Metal Jacket (Juice Rating 87/100). The first reason it did was because this movie is split in two halves with two separate but connected stories being told. The second reason this reminded me of FMJ was because of how visceral everything felt, from the camera work to the acting everything just felt extremely in your face and emotional.

The first half is the story of Tyler Williams and how his father pushed him to the brink with wrestling training. We see Tyler deal with his pregnant girlfriend, an alarming injury, pain killer addiction, all leading to a sudden tragedy. The second half is how his family and in particular his sister Emily deals with everything that has happened.

Music is as much a character in this movie as any of the actors. We hear Kid Cudi, Kanye West, Kendrick Lamar and numerous other sprinkled throughout the story. Each scene the music just pounds into your soul and makes this one of the more unique filmgoing experiences of the year.

This guy continues to rise and he gives a really heartfelt performance as the father in this. Yes he is tough on Tyler but he truly loves both of his children and shows it in some heart wrenching scenes. I thought he was the MVP of this movie for sure.

This guy clearly has a lot of talent given that this has some of the best shots of the entire year. I think he clearly cares about making emotional and communal movies which is lacking in the industry. I am excited to see what he does next. 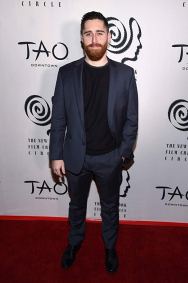 Waves is a movie that definitely tries to throw stories and emotions at you in pardon my pun but waves. I do not think everything lands, but there are some of the best moments of any movie this year embedded in this film. It is one of the more unique movies of the year and it definitely had me thinking.