Elsa the Snow Queen and her sister Anna embark on an adventure far away from the kingdom of Arendelle. They are joined by friends, Kristoff, Olaf, and Sven.

For a long time Disney animation had a no theatrical sequel policy, so even movies like The Lion King, or Aladdin, or The Little Mermaid only ever got direct to DVD (I know what the heck is a DVD right?) sequels that never had the original cast*. They did this I think to keep the integrity of their movies, while also challenging themselves to continue coming up with new stories. Recently thought the increase in box office had led them to start making sequels such as Wreck it Ralph 2 and now Frozen 2.

*Please see this mans webpage for more details on that

Frozen (Juice Rating 82/100) was, to put it mildly, an enormous hit. It made over a billion dollars worldwide and Let it Go became an anthem throughout the world. Ask parents anywhere and they will tell you their kids have watched Frozen hundreds of times. So it really was only a matter of time until we returned to Arendelle.

OK Juicers you know what time it is, Animation category season thats right.

The visuals in this were typically phenomenally from Disney. The hair movement along with the bodies are impeccable, and the expressions of the characters during all the songs make it feel like they were actually singing. This along with all the underwater horses that looked great, and the magic of the forest was really felt through the animation.

The cast was basically the same people from the original, Idina Menzel, Kristen Bell, Jonathon Groff, and Josh Gad are all great returning to their roles. They are funny and they all are great in their songs. I do wish they gave Sterling K. Brown and Evan Rachel Wood more to do with their characters though because they just felt so thrown in to push the convoluted story forward (more on that below)

The music of course will be the big topic of discussion after the huge hits from the first one. Into the Unknown is clearly the song they are trying to anthemize like Let it Go, and it is a good song but I do not think it will resonate on that level. I really enjoyed Some Things Never Change, Show Yourself, and of course the 80’s style music video of Lost in the Woods. So overall their are some very catchy and fun tunes in this movie, just no one song that I think will take it over the top.

This is where the movie really lost me. I know this is a kids movie, but it is just so typical and a storyline that has been told so many times. There was also no defined villain which always hurts the stakes for movies. I also believe they went for a darker storyline which is fine for adults but I think it will be less appealing for kids when they realize this is all about our inner selves.

Frozen 2 is a very well made movie, as is typical for a studio like Disney. Everything about it works for except for the story, and even though it does not reach the heights of the original I still think this is a worthy installment to the franchise. 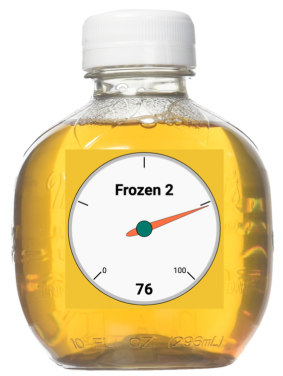 One thought on “Frozen 2 Review”