As I have talked about numerous times Cinematic Universes are all the rage these days with Marvel, DC, and now we have Warner Bros. MONSTERVERSE.

Listen, I have never been a huge monster guy and maybe that affects my opinion on this movie. However, this is my blog so all the haters can suck it.

On one hand people love monsters, and I always think it is important that theatres cater to all genres in order to maximize fans. On the other hand, none of these movies have been that great and since they cannot really communicate to an audience it inherently loses some of its appeal. There are human stories in all of them but they get so shoved to the side in order to see big CGI monster battles, that they honestly might as well not even have human actors.

The “story” for King of Monsters was Monarch (these movies S.H.I.E.L.D.) is trying to stop Tywin Lannister from releasing all of these “Titans” from there resting places. Once released the race is on to get Godzilla to come protect earth once again. Pretty thin plot and spoiler alert but Godzilla is recharging and they need it to go faster, and they blow up A NUCLEAR BOMB in order to recharge him. That is what we are working with here plot wise.

I usually do stock watch for the actors of a movie but Kyle Chandler, Vera Farmiga, Millie Bobby Brown and the others had so little to work with I’ll just save them for tidbits. Were watching stocks however for the Monsters of the MonsterVerse.

Stock Up – Mothra is the ultimate Pal. Not necessarily big enough to truly crush opponents but gets in the mix and is just a menace to deal with. The so called “Queen of the Monsters” is good to have on your team.

Stock Neutral – You would think Godzilla’s stock would be up but at the end of the day he needed a Nuclear Bomb to come back and be able to defeat Ghidorah and the rest of the monsters. Tough Look for the GZ. Next he will square off against Kong in a battle where I make him easily a -750 favorite.

Stock Down – Ghidorah was a beast for most of the movie but got worked near the end and got exposed brutally. You really just hate to see all three heads get destroyed at the same time, after dominating for most of the movie. It was Falcons – Patriots 28-3 Esque type of a meltdown.

Stock Neutral – Rodan didn’t really do much other thank show off some mean flying skills. He was kind of a pest but then he got destroyed by Mothra so he has some work to do in future movies. I think we will see a better outing from him next time.

For people who enjoy massive monster fights you will love this movie. But if you go in thinking this will have any semblance of a plot or script, than you will be sadly mistaken. The Monsterverse is alive and well I just do not know for how long can they keep this up? 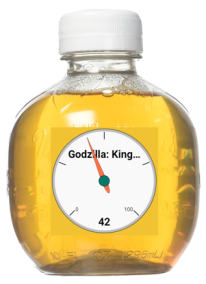 3 thoughts on “Godzilla: King of the Monsters Review”