Last year, simply put, was the Union’s best season in the MLS. They had the most points they have ever had, and had the most away wins they have had as well. They also had Borek Dockal on loan who led the MLS in assists with 18. They fought tooth and nail to get to the playoffs under coach Curtin and accomplished that goal.

Now, coach is going into this off season looking to try and keep the team together and try and build something real. 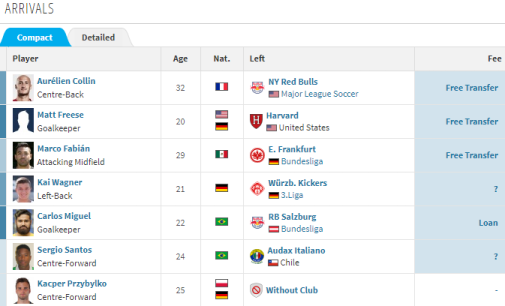 Unfortunately for the Union it seems like they lost more than they gained this off season. Obviously, losing Dockal is a killer because even if you have Accam, Sapong, and Burke who is going to pass it to them? Alejandro Bedoya does not seem to be the same player, and Warren Creavalle did not inspire much when he was given a chance. So this team seems like a prime candidate to take a step back.

I believe they will take a step back, but not too far, only because the east is so talented this year. So they will be fighting with teams like New England and Columbus for those lower playoff spots. I think they find themselves on the outside looking in when push comes to shove though.