As I said in my first post this is not just a movie blog, it will be a place where I write about anything and everything. So this is my first non movie post and it is going to be about the business of Boxing in 2019.

For a long time in history the Heavyweight Champion in Boxing was one of the most famous and important figures in the World. Names like Jack Johnson, Joe Louis, Rocky Marciano, Muhammad Ali, Mike Tyson and many more all were incredibly influential in different ways not just in the squared circle. However, as years have gone by and boxing was taken farther away from the mainstream only few names would resonate from time to time. De La Hoya, Pacquiao, Mayweather are names that reached the mainstream however never really impacted the culture like the Heavyweights of old. This is why boxing has become a sport that is so segmented and suffers due to the involvement of big money and greedy promoters. 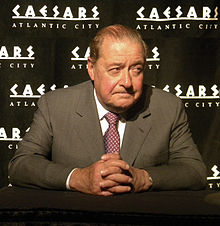 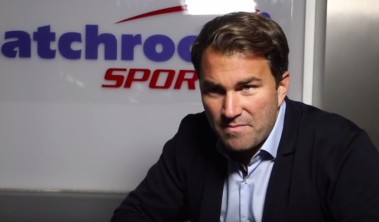 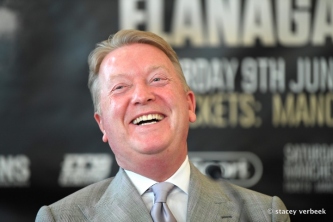 I wanted to write this in order to educate the common man on the state of boxing in 2019 and how it will push forward in the future. I am going to go through most of the Top Promoters, who their main broadcast network is, and who some of their top current fighters are. We just hope these promoters can work together to trade some fighters so that the best fights can be made no matter which network they are on.

Run by Bob Arum, Top Rank is one of the most historic promoters in the boxing business. They have promoted Muhammad Ali, Marvelous Marvin Hagler (His Legal name), George Foreman, Oscar De La Hoya, Manny Pacquiao, Floyd Mayweather (until his heel turn) and many many more. They have put on some of the biggest fights in Boxing history and absolutely have influenced this sport for a long time. They are particularly skilled in taking guys out of the Olympics and molding them into stars. In 2016 they left HBO after a long partnership to become ESPN’s main boxing promoter. Now all these events are either on free ESPN or the 5 dollar a month ESPN+ (PPV will probably come later). This has been huge for their brand and boosted skilled pugilists such as the aforementioned Lomachenko and Crawford to new heights. This partnership also effectively ended HBO’s long reign as the king of televised boxing.

The PBC is one of the biggest and most frustrating promoters in the sport today. They are run by the reclusive Haymon who does not give interviews and is rarely seen in public. He has a perception of being “good for fighters, bad for boxing” because he pays his fighters very good money to fight lower level opposition instead of challenging them and incentivizing them for big fights. This is compounded by the fact that they currently have the deepest and best stable in all of boxing. They have been putting their best fights on Showtime since the Mayweather heist, however they just signed a new deal with FOX to have big fights on the network and on FS1 and of course, since this is prizefighting, on FOX PPV. This will get their name out there the same way Top Rank is doing with ESPN. We all just hope they put together better matches than the first wave we are seeing.

Matchroom is an interesting case because Eddie Hearn is a very personable and pretty young promoter in a business filled with old and stodgy men. He does a great job at keeping his fighters active; however when you do that the matches suffer sometimes. Still though keeping your fighters active and in the limelight is better than fighting once a year (im looking at you PBC). He also puts on some of the most impressive in arena displays in the business. Obviously Anthony Joshua is one of the two biggest stars in boxing (along with Canelo) and having him can mask deficiencies on the overall roster. But Eddie works with other promoters and really does try to get the best matches possible, so when they launched the new streaming service DAZN (10 bucks a month) fans were shocked to learn (through an excruciating Michael Buffer commercial,) they could pay a monthly fee and get PPV worthy fights as apart of the package. So 2019 will be the real test to see if DAZN can put the right fights together to make the package worth it.

This is an easy one this promotion lives and dies with Canelo. Oscar is a terrible businessman and really everything he has done besides Canelo’s career and his own (mostly helped by Bob Arum) has been terrible. However when you have Canelo all faults are forgiven because he along with Anthony Joshua is the biggest star in boxing. After HBO shut down, DAZN offered Canelo a deal of 11 fights for $365 million dollars.

I mean yes he is worth it but it is still an incredibly eye popping number. However one has to wonder if he will still be incentivized to take big fights or if he will go the Mayweather route and cherry pick opponents yet still make big money.

Since DAZN offered Canelo, Oscar did force their hand to make sure they took his whole “stable”, so they will be fighting exclusively on the streaming platform.

There are of course hundreds of other promoters out there such as K2 Promotions with GGG or Frank Warren promotions with Tyson Fury. The above listed are the major promotions and major fight makers in today’s landscape so those are the names to remember if you want to enjoy the sweet science moving forward.

*my continuously updated Pound for Pound list is found here.