We had another solid fight night on Saturday capped off by a classic Boxing weird ending to an otherwise fun night. Here is my recap of the action!

Danny “Swift” Garcia (35-2, 21 KOs) was back in a BIG way dropping Adrian Granados (20-7-2, 14 KOs) three times en route to a seventh round stoppage. This was notable because Granados has fought tough fighters before and had never been stopped. People rag on Garcia for his two losses, but they are to Keith Thurman and Shawn porter, both in fights that easily could have gone the other way. So he is still thoroughly in the mix at 147 and a fight with the other A side of the weekend could get the blood pumping.

This was another title defense for Pound for Pound great Terence Crawford, and this time it was against the always entertaining Amir Khan. The fight was going as expected with a big knockdown in the first for Crawford and he looked to be on the way to a stoppage, until a low blow halted the action. 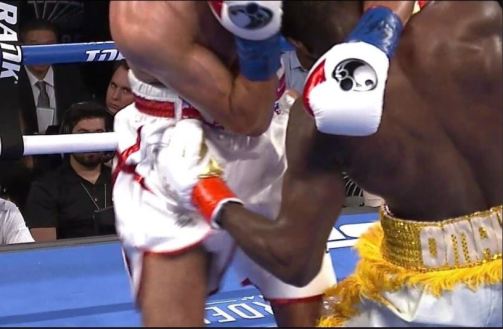 There was a lot of confusion but to my eyes this was more in the leg, but even if it was in the groin Khan gets 5 minutes to recover and to be honest should have probably continued. His trainer Virgil Hunter I guess had seen enough and did not want to see him take more punishment, so the result ended up with Crawford by TKO in the 6th. This is just a classic bad stain for boxing and it upsets anyone who wants to see the sport have any order. I guess that is why they call it the “Theater of the Unexpected”

In the Co-Main event Red Hot Prospect Teofimo Lopez (13-0 11 KO’s)  put on another show knocking out Edis Tatli (31-3 10 KO’s) with a vicious body shot in the 5th round. He looks like he is heading straight to the top, I just do not think he is ready for Lomachenko yet no matter how many times he asks. His feet just do not move enough for me. We will see what Bob arum wants to do though, for now we will just enjoy “The Takeover”

Another hot prospect for Top Rank Shakur Stevenson (11-0 6 KO’s) put on a boxing clinic against the tough Christopher Diaz (24-2 16 KO’s). He won every round in my mind and looked like he can box just as well as he can punch. I think he can compete right now with every champion at 126 pounds.