What an epic weekend of Boxing we have ahead of us. We have the best fighter in the world defending his belt, A young gun looking to continue creating his legacy, and the Undisputed Womens Middleweight Championship. Here is my preview of all the great fights coming up this weekend.

Implications: This another Title Defense for the Pound for Pound King and Unified WBA, WBO, and Ring Magazine Lightweight Champion Vasyl Lomachenko. He wanted to Unify and grab a third belt in the Lightweight division but IBF Champion Richard Commey got hurt so in comes Mandatory Challenger Anthony Crolla.

Crolla is a guy who won a belt at Lightweight but every time he has really fought someone high level he has lost. He lost twice to Jorge Linares in Unanimous Decisions, and Lomachenko finished Linares last year.

Lomachenko’s brilliance has been stated time and time again, and it is just hard to judge his fights because of how much better he is than everyone.

396-1 as an amateur and 3 weight class titles in 13 fights have made him the Pound for Pound king so I do not expect he will have any trouble with Crolla. I think he gets Crolla out of there within 9 rounds, and hopefully gets the Richard Commey or Mikey Garcia next.

Implications: This is another Title Defense for WBO Super Welterweight Champion Jaime Munguia. He blasted his way to the top of the 154 lb. Division but there is a lot of talk this is is his last fight in the weight class. He is bulging at the seams and seems to be ready to test the waters at 160, I just do not know if he will be able to hide his flaws long enough from the big boys at the top.

Dennis Hogan, being honest, is a Mandatory Challenger that on paper should not give Jaime any trouble. This is a homecoming fight for Munguia so he will want to look good and give the fans what they paid for, which should not be an issue because he has never been in a boring fight in his life.

I am picking Jaime Munguia to retain his belt by Knockout in the 4th round.

Implications: This fight is for all the marbles in Women’s Boxing. It has every Middleweight Belt on the line and in my mind the winner of this fight is the Number 1 Pound for Pound Women’s Boxer in the world. We have Christina Hammer, the stoic German who has reigned over the Middleweight Division for 10 years with her Jab. And we have Claressa Shields, the brash two time Olympic Gold Medalist who has accumulated a closet full of belts in her first 8 fights. 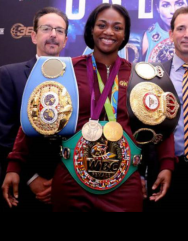 This is being labeled as one of the biggest fights in Women’s Boxing history, and Main Eventing Showtime backs that up. The Gameplans are simple, Hammer is going to try and box more, use her jab and length and keep Shields at bay. Shields is going to try and draw her more into a semi brawl and hopefully go to the body to slow down Hammer’s movement.

I am a little biased because I am a big fan of Shields, but I do just think she is the best in the world right now. So I am picking Claressa Shields by Decision in this fight.

*There is also a fight on FS1 between Caleb Truax and Peter Quillin that should be a banger if anyone is interested on Saturday Night.

I hope everyone enjoys the incredible fight night!