My father (shoutout Kenny G) always told me growing up “if you have to advertise a movie this much, then its probably not any good.” So when I was watching the Alita: Battle Angel trailer for the 12 millionth time I basically felt like Jeff Goldblum in Jurassic Park.

Even with James Cameron producing and Robert Rodriguez directing, I still thought this movie would be a big ole pile of poop. However, as always I tried to go into this movie with an open mind and just tried to enjoy myself.

Alita: Battle Angel is the story of a cyborg named…wait for it…. Alita, who is found in a trash pit by Dr. Dyson Ido (Christoph Waltz) and learns secrets about her past to become a hero. Now of course we have all seen something like this before ala Hunger Games, Divergent, Maze Runner and whatever other story where a small group rises up against a higher power. We learn that things are of course not what they seem, and the movie ends with a sequel set up that is so unnecessary it made me laugh harder than anything in the previous 100 minutes.

I will say Rodriguez, who is known to do great with kids in movies (Spy Kids!), gives us a lot with Alita (Rosa Salazar) and shows us everything she can do in very interesting ways.

He also shot the movie well and all the scenes look very cool (although I should have seen this in IMAX because I heard it is very eye popping).

Stock Up – Rosa Salazar I had only seen in ironically the Divergent, and the Maze runner movies. She was the best part about this movie with her combination of soft, loving tones, and being able to flip the switch to become the battle Angel. It could not have been easy to play this part (I mean she is a damn Cyborg with MASSIVE eyes), so full props to Rosa and I look forward to the rest of her career.

Stock Down – Christoph Waltz what are you doing bro. He won two Oscars for Inglourious Basterds and Django Unchained but since then….woof 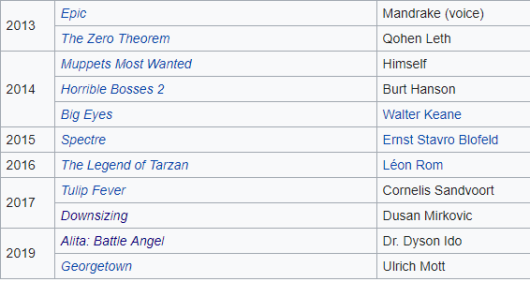 Sure hes looking for those pay days but damn Christoph we need to see you in some better movies.

Stock Neutral – Mahershala Ali I mean this dude can just do no wrong. He did not have a ton to do in this movie, but he still owns the screen anytime he comes on. He plays one of the villains in this and is as menacing as ever, reminding us of the great first 6 episodes of Luke Cage season 1.

This movie had a huge budget and was a relative flop at the American Box Office. Fortunately it will make money once all the International sales are done. Alita was better than I thought it would be, but I think it would have been better giving us a more conclusive ending rather than a sequel set up. If you like action though go see it there is enough good, popcorn fun to get you through.

*As always you can find all of my movie ratings here.