Here we go I am going to preview a bunch of these fights and hopefully we have another great night to talk about after it is all said and done.

Yes you read that right Diego Sanchez is still fighting on Pay Per View cards in 2019!

Sanchez is easily one of the most intense combat sports athletes of all time. He never has been a technique guy, but has the heart and will to beat anyone. Mickey Gall is a fighter who was found on Dana White’s Looking for a Fight and is a very slick Jiu Jitsu player on the ground. Gall is clearly trying to use Diego’s name to boost himself in the mind of fans.

Diego does well when he gets on top of other fighters, but Gall is great fighting off his back so that style kinda plays into his game plan. I think Gall submits him in the second round of this fight.

SUPERSTAR ALERT!!! Johnny Walker (unreal name already) has come into the UFC and taken the Light Heavy Weight Division by storm. The Brazilian came in on Dana White’s Contender series and now is 2-0 in the UFC with two finishes and two Performance Bonuses. He also has a key element that Dana White loves, and that is a personality that fans want to see.

Misha Cirkunov is a fighter that pundits had high hopes for, that seems to have settled into a gatekeeper role. The UFC of course wants the Walker train to keep rolling and test his ability against a high class fighter. Johnny can bang but this is on 2 weeks notice for him so it could be dangerous.

I still think he has that something special though and gets it done in the second round via TKO.

Jeremy Stephens vs. Zabit Magomedsharipov (didn’t even look it up suckers)

This is a super intriguing fight to headline the prelims on ESPN. You have Jeremy Stephens, in his 31st UFC fight (insane), the absolute killer vs. the man know as Zabeast. Zabit is a guy who has come into the UFC with a lot of hype and has exceeded those expectations every time. We know what Jeremy Stephens does, he throws every shot with absolute power, and even though he has gotten more patient he can still be reckless. Zabit however, is a different animal because he can do everything and anything in MMA and he does it smoother than most people can do one discipline. Simply put he is something we have never seen before in the UFC, and I am interested to see how far he can take it.

Stephens is going to be looking to test Zabit’s chin, and his will in the cage. If Zabit comes out of this one he is a real threat for the Featherweight Title. Zabit by second round submission.

Cody Garbrandt stormed into the UFC and ran roughshod through the Bantamweight division, culminating in an all time great performance against Dominick Cruz. After he got the title he started calling out former teammate, and former champion, TJ Dillashaw. That did not go so well, because Cody fought with too much emotion and he got knocked out. A few months later they had a rematch, and Cody did not seem to learn from his mistakes and got knocked out even quicker. Now he looks to come back against a tough Pedro Munhoz. Munhoz is a guy who can beat almost anyone in the divison, however when he has gone to the upper echelon he has lost, sometimes close, but lost none the less.

This is a fight where we will see if Cody can overcome the past two fights and lock back in as a contender. I think Munhoz with put up a tough fight, but Cody will catch sometime in the late Second round to set up more fun int he 135 lb. division.

This is a fun strawweight fight to watch in the middle of a great card. Two high action women who will show off some exciting skills for the 115 lb. class. Tecia Torres is exactly what her nickname says she is, a tiny tornado. However, she does seem to lose whenever she steps up in competition. Zhang is a girl who has won 18 straight since losing her MMA debut has some killer skills. We just have not seen her in a high level fight yet.

I do think Zhang has the goods though and will outclass Torres over three rounds to earn a Unanimous decision. 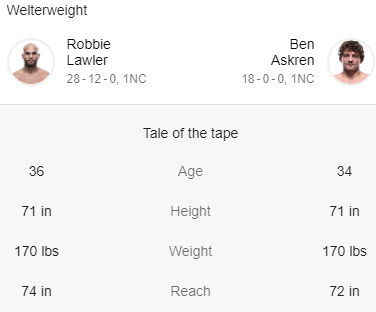 No one ever thought Ben Askren would be in the UFC, until Dana White made a deal with One FC to essentially trade all time great Demetrious Johnson for Askren. This was a historic moment in MMA because for years fans had been clamoring to see the undefeated wrestler in the Octagon. He was a champion in Bellator and One and now it is time to find out if he is as good as he thinks he is. He will find out against Former Champion Robbie Lawler if he can hang with the best fighters at Welterweight. Robbie is a tough, and gritty fighter. He has the whole package and has been in some of the greatest fights in UFC history. Has he taken too much damage to come back from? Lucky for him Askren will be trying to take this to the ground and maybe submit him.

This is a huge moment for Askren and the UFC. If he beats Lawler the UFC will have a new star on its hands, and if not they will be answering questions on why they traded arguably the greatest Mixed Martial Artist of all time. I do think he gets it done though by unanimous Decision. 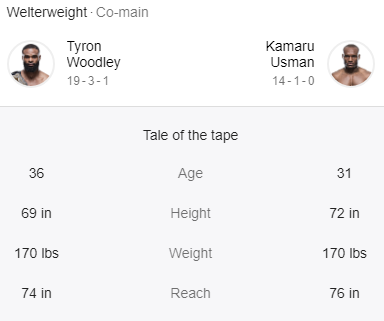 OHHHH BOY am I excited for this one! Welterweight Champion Tyron Woodley is one of the best fighters in the UFC. He also does not get the kind of respect from Dana and the fans that he probably should. He has defended his belt 4 times against number 1 contenders and is vying to be the greatest 170 lb. fighter of all time (GSP still has something to say). He’s like a predator, who waits and waits and the strikes with enormous ferocity.

His opponent Kamaru “The Nigerian Nightmare” Usman is more like a Boa Constrictor who just wraps himself around opponents and suffocates them. He has been able to put his opponents in deep trouble because of the consistent pressure he puts on them throughout the fight. He has proved over three and five round fights he can strike and wrestle with anyone in the division.

Kamaru almost seems like a young Tyron, I just do not think he is as smart or good at gameplanning as “The Chosen One.” Tyron might be the smartest fighter in the UFC and I think he proves that again in this fight with a Second Round TKO.

No matter what you think about him or his picograms, Light Heavyweight Champion Jon Jones has the best resume in UFC history. He has beaten every single person in his path and usually does it by beating the opponent at their own game. In his fight on New Years Eve he absolutely dismantled Alexander Gustafsson and showed that he is still at the top of the fight game. His opponent Anthony “Lionheart” Smith is a former Middleweight who moved up to the 205 lb. division, and decided to just star knocking everyone out. He is a fighter through and through, sure he has skills or he would not be here, but he gets his opponents to engage in brawls and then uses his power to knock them unconscious.

Jones is just too smart to get sucked into that, so Smith will have to find another tool in his armor to beat him. I do not think Smith has that though, and Jones will take him down and pound him out until the ref jumps on top of them. Jones by First Round TKO and then goes up to challenge DC at Heavyweight.

It should be another amazing fight night in Vegas and I hope everyone buys this amazing card because this is what Ultimate Fighting is all about.

*As always you can find my Pound for Pound list here.