We have a fun card on Sunday this weekend for the UFC with the return of a legend and the potential continued rise of the Predator. I will be previewing the 4 most important fights of the Card. So in the immortal words of Big John McCarthy “LETS GET IT ON”

This is a fight between two men who were knocked out savagely by Marlon Moraes. Since then both of these men have fought back and are trying to earn a title shot in the extremely crowded Bantamweight rankings. Rivera is a good pressure fighter, who has really good stand up. Aljo is a guy who has solid stand up, however his wrestling and jiu jitsu are where he makes his money. I mean look at this!

Aljo has been looking for a breakout fight and this could be the one. I think this will be a fun fight but Sterling will be too much and win this by decision.

This is a fight where you have two girls who can put on fun fights. Cortney Casey has had a rough go of it recently with three straight split decisions, only one going her way. She is tough, and has skills but seems to lose everytime she faces an upper echelon fighter. Calvillo came in with a lot of fanfare because she was undefeated and trains at Team Alpha Male. Since then she lost her only fight in a tough decision to Carla Esparza. She is an excellent grappler and will submit any opponent who makes a mistake.

Calvillo has a great personality that the UFC can market and I think she gets it done in the second round via submission.

For the Co Main Event we have two guys who both had been begging for a long time to fight top 15 guys. Now they are both prominent names who are coming off recent losses. James Vick is extremely tall for the division, but does not seem to use his height to his advantage. He lets his opponents come too close, and then things like this happen.

He is a very good fighter, and has the skills to win this fight if he utilizes a jab and strong leg kicks to keep the distance.

Felder is an extremely tough and smart fighter, who now announces UFC fights a side gig. He has however seemed to lose any time he steps up his competition level (except his last fight was at 170). So this is a pick em fight in my opinion.

I do not think Vick will be able to keep the aggressive Felder off of him all fight. So i think eventually Felder will wear him down on the body and win a tough fought decision, to establish himself firmly in the top 15. 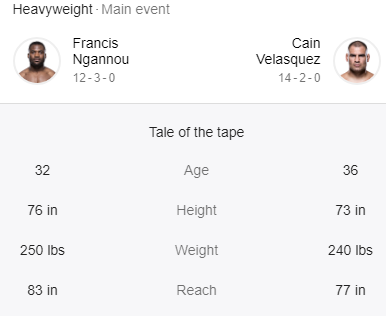 Our main event features arguably the greatest HW of all time in the UFC vs. probably the hardest puncher in UFC history. HOW CAN THIS NOT BE A BANGER.

One of the greatest HW’s in history Mr. Cain is back and ready to reclaim his throne. He is known as Cardio Cain and has always been able to wear down his opponents with a smothering style. He can strike, can wrestle, and he can absolutely just overwhelm people. Butttttt 2.5 years is a really long time in this sport, even with training with Daniel Cormier there is no telling the ring rust we will see.

The man he is facing is Francis Ngannou who absolutely steamrolled his way to a title shot.

*I was there for that second one (not a big deal or anything) my girlfriend legit asked me sitting there if Overeem was dead.

But Enough about me, after his title loss to Stipe Miocic, he had one of the worst fights in history with Derrick Lewis. There were a lot of questions about him after that, and he shut up all the critics with a stunningly quick knockout of Curtis Blaydes. Now he faces Cain and we will see what we have with him.

This should be an absolute cracker of a fight and I absolutely cannot wait. I think we will see Cain struggle early and get clipped by an upper cut from hell, hopefully we see a reaction like this again.

Enjoy the fights everybody!

*As always my pound for pound list can be found here. (click tabs at bottom of sheet)