We had a slower weekend of boxing this week, however there were still a couple of Title fights I wanted to highlight.

The DAZN card on Saturday from Houston was not a very good card on paper to be honest. We had a couple of top prospect fights and a Title fight that looked like it was going to be a walk through. That is mostly how it played out on Saturday except one pretty big upset. That upset was Xu Can upsetting Jesus Rojas for the WBA (regular) Title (LOL WBA) in an incredibly close fight. This was an all action fight that should surely produce a rematch.

*Highlights of the bout are here.

The Main event for the Card was a battle for the WBO Middleweight Title. On paper this looked like it was going to be an easier title defense for Champ Jaime Munguia. However, the homie Takeshi Inoue came to fight. He was an absolute warrior the entire night, walking down Munguia all night and trying to make anything happen. He also took some incredible shots in the process, and somehow made it to the scorecards. 120-108, 120-108, and 119-109 were the scores for Munguia but I do not feel that represents the fight very well. Even though Munguia may have won most of the rounds, Inoue was very game and made every round extremely hard to score.

*Highlights of the fight are here.

On FOX saturday night the PBC Card in Brooklyn was led by the return of WBA Champ Keith “One Time” Thurman. He had been out for almost 2 years but made his return saturday in a precarious performance. Before that fight though came a HW battle featuring a rising star in the division.

Adam Kownacki is a Polish fighter who has relocated to Brooklyn and fights most of his fights at the Barclay’s Center. He puts on fun fights and has built a great fan base in Brooklyn. He beat the snot out of former title challenger Gerald Washington in 2 rounds. This guy has a trajectory of fighting the best Heavyweights in the world. I would love to see him in there with someone like Oleksandr Usyk, Alexander Povetkin, or Luis Ortiz next.

Might need a bigger belt to get for this guy… 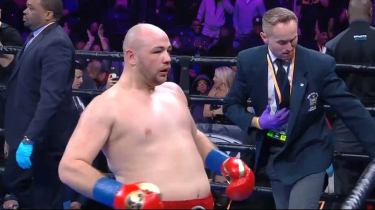 *Highlights of the bludgering are here.

In the main event the aforementioned Thurman looked like he had all his reflexes and timing back against challenger Josesito Lopez. There were a couple scary moments, particularly in the 7th round, he looked like he was out on his feet and did some incredible scrambling to stay on his feet and survive the round. The scores were 115-111, 117-109 and an absolutely absurd, borderline criminal 113-113. I hope now Keith will step up and take a fight with one of the big dogs in the division: Shawn Porter, Danny Garcia, or god forbid Errol Spence and Terence Crawford.

The Real MVP of this fight was the referee Steve Willis who produced some incredible content on Saturday. This reaction and this one are Hall of Fame reaction shot material.

*Highlights of the fight are here.

I hope everyone enjoyed, I will be back tomorrow to preview the big Light Heavyweight showdown between Eleider Alvarez and Sergey Kovalev.