Huge Fight Weekend coming up, we have Boxing on all platforms: ESPN, DAZN, and Showtime PPV. I am diving deep into these cards so I hope you enjoy!

Who: Bryant Jennings vs. Oscar Rivas

Implications: So this is an interesting heavyweight battle between an older former title challenger and a young up and comer. With Jennings (24-2, 14 KO’s) you know what you are getting, a tough durable and very capable fighter, whos only losses are to Wladimir Klitschko (for the title) and Luis “King Kong” Ortiz. Those are very respectable losses but it also shows he is not quite a top level fighter.

Rivas (24-0, 17 KO’s)  is more of an unknown commodity, however just by looking at his resume this is his first major step up. He was a standout amateur in his native Colombia but has not made a major mark as a pro yet. His knockouts seem to have stopped since he has stepped up his competition so it will be interesting to see how much power he has against a guy like Jennings. If you watch his old fights he looks a little slow and likes to swing his hooks wide. Someone with Jennings experience will see right through that.

Judging from the style matchup where Jennings is quicker and more technical I believe Jennings will get a Unanimous Decision here, probably in a closer fight.

Shakur Stevenson (9-0, 5 KO’s) vs. Jessie Cris Rosales (22-1-1, 10 KO’s) – This is a showcase fight for one of Top Ranks biggest prospects. Olympic Silver Medalist Shakur Stevenson will again show why he is so highly rated, against a guy who’s name you never heard before and probably will not hear after. 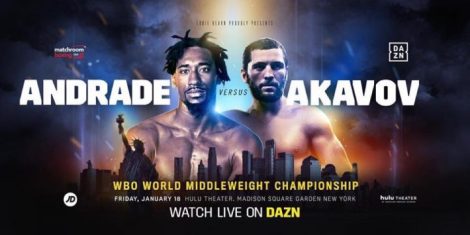 Implications: When former WBO Champion Billy Joe Saunders went off the deep end, Demetrius Andrade (26-0,16 KO’s) stepped up and claimed the title in a fight with unknown Walter Kautondokwa. He was slick, he moved, but ultimately disappointed by not being able to get his opponent out before the final bell.

The former 154 lb. champion has had issues in his pro career with promotions, and inactivity and it finally feels like he is at a place where he can thrive. He signed with DAZN and now is more active than he has ever been. Top fighters do not want to fight him because he is a smooth lefty who will make anyone’s night in the ring extremely difficult.

Akavov (19-2, 8 KO’s) is a guy who has already challenged for this exact title when Saunders held it and lost by close Unanimous Decision. He is a tough southpaw who will come forward, which should help the counter punching Andrade.

I think this is a tailor made fight for Andrade and he will again win this with a very wide Unanimous Decision to retain his title.

Jorge Linares (45-4, 28 KO’s) vs. Pablo Cesar Cano (31-7, 21 KO’s) – This is Linares’ second fight since losing his lightweight title to PFP #1 Vasyl Lomachenko. He has since moved up to 140 lbs. and looks healthy and still extremely skilled. He has always been one of the most graceful boxers in the sport however has had issues with cuts and mental lapses. He should take care of Cano sometime in the middle rounds.

Amanda Serrano (35-1, 26 KO’s) vs. Eva Voraberger (24-5, 11 KO’s) – Amanda Serrano is going for a title in her 7th division with this fight! Voraberger is the WBO Super Flyweight Champion and is trying to retain that. This feels like a history making fight for Serrano that will hopefully push her into a fight with Heather Hardy. Serrano by wide decision.

Who: Manny Pacquiao vs. Adrien Broner

How: Showtime Pay Per View

Implications: Manny Pacquiao (60-7, 39 KO’s) is one of the greatest and most lucrative boxers in history. He has won titles in 8 different weight classes and is still fighting competitively at the ripe age of 40. He is coming off his first Knockout since Miguel Cotto in 2009, when he smashed Lucas Matthysse this past summer in Malaysia.

He is fighting in the US for the first time in 2 years due to rumors of major tax problems. Pac is one of the most well rounded fighters ever and even though he is older he is still not someone to take lightly.

Mr. Broner(33-3-1, 24 KO’s), however is someone who is always in the news as well, usually for the wrong reasons. See here or here for just a few of his numerous incidents. He came up as one of the most highly touted fighters and is technically a 4 division champ (every “champ” he beat was hand picked and perfect for him). Due to his troubles in and out of the ring he is still one of boxing’s most bankable stars, because he is so divisive. He is coming off a loss to Mikey Garcia and a Draw with Jessie Vargas, yet continues to be put in major spotlight. When it comes down to his fighting though, he truly does not have a signature win. In his biggest fights he has come up short and that is usually due to his odd style of not throwing many punches. He is very quick and elusive, he just cannot pull the trigger when it matters most. But as always he is going to put on a fun show for the people watching

First off, we are not going to glorify the disgusting WBA by calling this a title fight. It is a solid fight but there is no deciding the best fighter in the division with this. I believe that in this fight Pacquiao will bank rounds over time and win this fight by a couple rounds. I also think the Pay Per View will do well enough (even though its 75 damn dollars) that we will see what no one is asking for Mayweather vs. Pacquiao II.

Badou Jack (22-1-3, 13 KO’s) vs Marcus Browne (22-0, 16 KO’s) – Badou Jack is a very solid fighter who always finds himself in close fights. Marcus Browne is an up and comer who could use this fight as a springboard to stardom. I believe Browne will pull off the upset in a close Unanimous Decision.

This will be an awesome weekend of Boxing so hopefully you can find some time to enjoy the sweet science before football starts on Sunday.

*My pound for pound rankings can be found here.