It has always been very interesting to me how fantasy writers can basically write one successful series and live off of it for the rest of their lives. J.K. Rowling, George R.R. Martin, and of course J. R. R. Tolkien (my name is A.J. maybe I can be a famous writer too since I go by initials).

Tolkien obviously wrote The Hobbit and the Lord of the Rings and is an icon for his unbelievably detailed writing about the nature throughout his books. The only thing I really knew about him before this movie was the fact that he went and taught at Oxford, so I was excited at least to hear the story even if the movie was not great.

Folks, let me tell you, this movie is just not good. I like biopics and I understand the formulaic nature of them, but this felt like a cop out and never really hit the mark with me. Directed by Dome Karukoski, this tells the story of young Tolkien, played by Nicholas Hoult, as he goes through school, the army, and finds love in Lily Collins character. Throughout the way the movie tries to show the images in his head of future works, and how he thought of them, and that just did not work for me at all. It just felt really cheesy and out of place, and a cheap way to learn about a brilliant and fascinating writer.

They also detailed his relationship with his friends or “Fellowship” as they say in the movie, which feels of course very on the nose. The relationship though was the heart of the movie and it seems, based on the portrayal, the heart of his formative years which shaped his ideas.

Stock Up – Nicholas Hoult is a guy who has been around since he was a kid in About a Boy. Since then he became The Beast in the new X-Men movies and he was just in the critically acclaimed movie The Favourite. It seems that he is trying to become a prestige actor and this performance did nothing to deter that. He was really good as Tolkien, and was probably the best part of the movie. I look forward to his progression.

Stock Neutral – Lily Collins is an actress on the rise being in this and the recent Ted Bundy movie on Netflix. She is also Phil Collins daughter, which does not really matter it is just something I wanted to write. Collins was ok in this as Edith, so I do not think her stock went up or down yet, I believe it is more of a wait and see approach with her.

As biopics go, I learned a lot about Tolkien in this, but it felt like I could have just read his Wikipedia page to get this information and I would have been a lot less bored. It was competently made and looked pretty good on screen, but otherwise not a ton to redeem here. This was a slog and I will now go home and watch Lord of the Rings to get the taste out of my mouth. 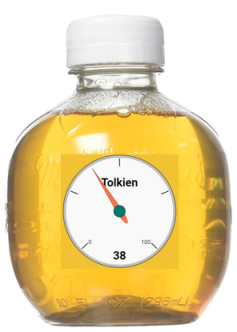 One thought on “Tolkien Review”