We have a good fight night card this weekend on ESPN+ from Fortaleza, Brazil and it is the second straight card being headlined by Bantamweights. It is also interesting because every competitor in our two main events are Brazilian. We have basically a title eliminator with the rematch of Raphael Assuncao and Marlon Moraes in the main event. And in the co main we have the great Jose Aldo going up against Renato Moicano. I am going to preview the 4 most interesting fights on this card. 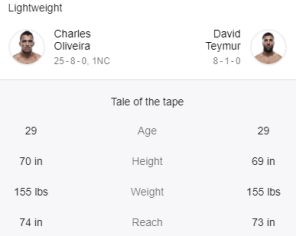 Charles Oliveira is simply one of the greatest grapplers in UFC history, (we have another one in the next fight) he is truly special when it gets to the ground. David Teymur is a guy who’s specialty lies more in the striking department.

So this is a classic striker vs grappler situation and usually in those fights the grappler wins. Teymur is very good at staying away from opponents strengths, however I think Oliveira will be too much over time.

Charles Oliveira by submission in the 2nd round. 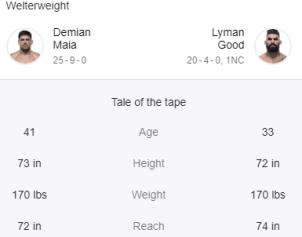 As I alluded to before there is another candidate for greatest MMA grappler of all time on this card, and that is Demian Maia. For so long in the UFC he has been so reliable with everything he did. You knew exactly what he was going to do and he still accomplished it with everyone he fought right up until the top. He lost his two championship opportunities however that does not mean he is not a dangerous opponent still at all times. His Jiu Jitsu will make him a player as long as he decides to keep doing it.

Lyman Good his opponent has been in MMA for a long time, but truly has not accomplished a ton yet at the highest level. He has only fought 2 times in the last 3 years one of those being his latest victory against Ben Saunders. To be honest he looked really good in that Saunders fight and pundits thought it might be signalling a run for him.

I do not think that is going to happen, I believe Maia will get him down at some point and submit him late in the first round. I also have a sneaky suspicion this may be the last time we see him in the Octagon. Enjoy him while we can. 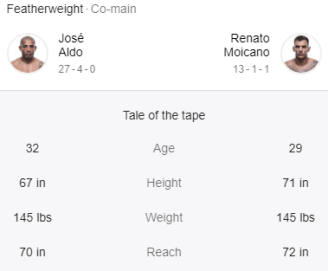 There are two things that fans think of when the name Jose Aldo is mentioned. A lot of fans will immediately laugh and make a 13 second joke about his knockout at the hands of Conor Mcgregor. On the other hand, there are many fans who will wax poetic about his unbelievable title reign, where he steamrolled everyone in his path for 10 years.

Enough has been said about the Conor Fight, but since then he is 2-2 with both of those losses to Champion Max Holloway (I was at 218 in Detroit, Not a big deal). He has not looked particularly great until his knockout of Jeremy Stephens in July last year.

He has been talking about retirement for awhile so who knows which Jose Aldo will show up on Saturday.

Renato Moicano is a red hot prospect in his prime, who has been methodically making his way through the divison. He has only lost one fight, a fight in which he was winning, until he got caught by the human boa constrictor, Brian Ortega. Other than that he has looked extremely solid, he moves and jabs like a boxer with a long frame, and has very good grappling skills as well. This is a guy who can be challenging for a title extremely soon. This is a massive step up, but with the way he looked against Cub Swanson, he should be able to continue his move up the division.

Renato Moicano wins by hard fought decision, and he challenges Champ Max Holloway in the cage. 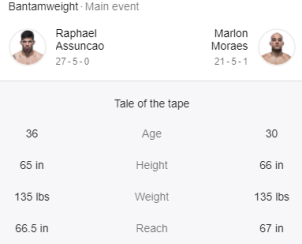 The Main Event on Saturday is the rematch between Raphael Assuncao and Marlon Moraes. In their first fight it ended in an extremely close split decision that went to Assuncao. That also happened to be Moraes’ first fight in the UFC after a remarkable run in the PFL. Since then Moraes has been a one man wrecking crew, knocking the days out of Aljo Sterling,

So he seems to have found his footing in the UFC (see what I did there?)

Assuncao is a guy who honestly should be fighting for a title. He has only lost 1 time in 8 years and that loss was to current champion TJ Dillashaw (who he also holds a win against). The Main issue is that he fights a very defensive and boring style, where he wins many close decisions. He is not the marketable type of fighter the boss man Dana usually loves. However, that does not mean he is not a great fighter and has a legit chane to hold the belt before the end of this year.

I do not see that happening, I believe Moraes will be busier this time and pull out a decision where he possibly wins 4 rounds to 1.

I hope everyone enjoys this fun card from Brazil!

*My MMA pound for pound list can be found here.